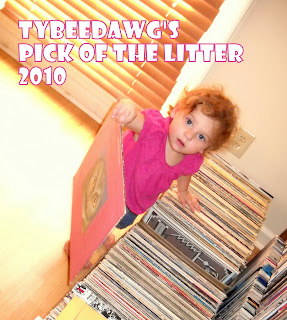 TybeeDawg’s Pick of the Litter 2010

“Where does it go? The good Lord only knows….seems like it was just the other day…”

Billie Joe Shaver sure knew what he was singing about, because 2010 got away from us pretty quick, didn’t it? I’m sure I’m stealing this from some forgotten comic’s stand up act, but did you ever notice that kids measure their ages with fractions while adults use decades? (“This is Alicia. She’s eleven.” “No I’m NOT. I’m eleven and a HALF.” “Hey, how old is your friend Ginger?” “Not sure, she’s in her thirties, I think.”)

I think that what I liked most about my favorite music this year is not so much that it was incrementally pulling me forward as much as it was wrapping me in some comforting layers of reassurance, so there’s nothing here that’s cutting edge or experimental, just some things that made me feel good. So in that sense, 2010 was less of a magic carpet than a slightly threadbare security blanket.

With that, here are some albums that kept me warm:

Jim Lauderdale - Patchwork River - With help from Al Perkins on dobro, E-Streeter Garry Tallent and James Burton on guitar, Lauderdale and Grateful Dead lyricist Robert Hunter have the year’s most compelling record. Lauderdale serves up melodies and hooks while Hunter consistently delivers memorable lyrics like “If you’re looking for justice, what you doing in court?” This record spent more time in my head than any other on this list.

Darrell Scott – A Crooked Road – A very ambitious double album from one of the most talented songwriters and musicians working today, and each listen unveils a new level of complexity. In this case, words fail me, so just go get it and thank me later.

7 Walkers – 7 Walkers - An unfailingly delicious homage to the Crescent City courtesy of Papa Mali, Dead drummer Bill Kreutzmann and Meters bassist George Porter Jr. The record is scattered with gris gris and absinthe and slathered with shifting textures and grit. 7 Walkers is one of the best things you’ll put in your ear all year.

Will Kimbrough –Wings – Will Kimbrough’s folksy Americana sound is spiced with pop and Memphis R&B and seasoned with his own banjo, mandolin, guitars and keys, but lyrically is very much rooted in his relationship with his family and with himself. With Wings, Kimbrough has crafted a record for grownups that doesn’t make you feel old.

Robert Plant – Band of Joy – Distinctly American in feel and tone, Plant is backed by some of the best musicians Nashville has to offer (Buddy Miller, Patti Griffin, Darrell Scott, Byron House), who tackle both traditional tunes as well as those by songwriters like Townes Van Zandt, David Hidalgo and Louis Perez (Los Lobos), and Richard Thompson.

Honey Island Swamp Band -Good To You – This New Orleans band comes on like some funky, blenderized mix of the Gourds, Little Feat, the subdudes, Mofro and Paul Thorn. Be good to yourself and get a copy of this one.

Packway Handle Band -What Are We Gonna Do Now? - You know what I say? The Athens-based Packway Handle Band can pretty much do whatever they want. This is easily their most accomplished and well-rounded, they seem poised to step things up a notch and stand toe-to-toe with the best folk/bluegrass bands around.

Ray Wylie Hubbard -A. Enlightenment B. Endarkenment (Hint: There Is No C) –Ray Wylie testifies that “Muddy Waters is as deep as William Blake” and churns out a mix of rural blues and poetic chaos as the backdrop for his fatalistic tales of death, dust and destruction.

Nudged out of a crowded field: Paul Thorn – Pimps and Preachers, Carolina Chocolate Drops - Genuine Negro Jig, Peter Karp and Sue Foley - He Said She Said, Have Gun Will Travel - Postcards From The Friendly City.