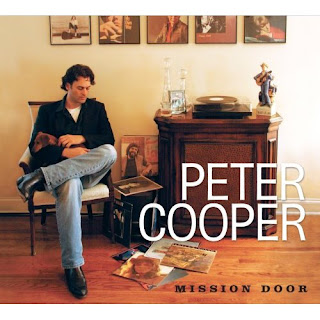 
On “Thin Wild Mercury,” a song co-written with Todd Snider, Peter Cooper tells the story of how folksinger Phil Ochs gave Bob Dylan some honest feedback about his new sound and was summarily ejected from the star’s limo, along with the harshest insult Dylan could muster: “Phil, you’re not a writer, you’re a journalist.”

That he chooses to relate this tale is revealing – since Peter Cooper is both. As the music writer for Nashville’s daily paper, The Tennessean, he covers a scene that is too often over-covered and does it with style and simplicity. As a singer-songwriter, Cooper’s songs are eloquent without being stilted and manage to tug a heartstring just as easily as they can coax a smile.

Mission Door is the East Nashville resident’s first full-length album and he loads it up with friends like Snider, Nanci Griffith, Jason Ringenberg (Jason & The Scorchers), Dave Roe (Johnny Cash), Jan Gunderman (Jayhawks, Last Train Home), Paul Griffith (DADDY), and steel guitar impresario and Hall of Famer Lloyd Green, who also co-produces. Indeed, Green’s swoops and swells on the pedal steel permeate the record like a shot of moonshine – it takes your breath away, and then makes you feel warm all over.

Of the twelve tracks, Cooper wrote or co-wrote ten of them. The other two were written by Eric Taylor, a past award winner at the Kerrville Folk Festival. With a voice that’s softly worn around it’s perimeter, like the rounded edge of a bar, Cooper tells the stories of people who would, on the whole, rather not be in the situations they’re in. Check out the Charlie Rich fan who finds himself in the middle of a barroom shootout (Taylor’s “All The Way To Heaven”) or the poor guy who resorts to postulating that predestination is the reason he’s sitting at the bar getting drunk (“Sheboygan”). Amidst all that, he manages to sneak in two definitive songs about a couple of legends: Hank Aaron and Townes Van Zandt. First, I defy anyone to find a song about sports that is a truer blend of heroism, determination, racial mores and the confusing and often brutal attitutes of race in the South in the 60s and 70s than “715 (for Hank Aaron) or a take on Townes that cuts as close to the legendary bone as the line "after the show, if you could call it a show," from “Take Care.”

If Mission Door was a class, it would be Good Songwriting 101, and if Peter Cooper keeps this up, he’ll quickly be teaching on a graduate level. Bob Dylan and Phil Ochs would be proud.